Special Branch Tree Services are a Tree Surgery Company based in Holbury, Southampton, that provide a full range of Tree Surgery srvices to residents and businesses througout Southampon, Fareham and Portsmouth.

The reduction in height and/or spread of the crown (the foliage bearing portions) of a trees. Crown reduction may be used to activate mechanical stress on individual branches or the whole tree, make the tree more suited to its immediate environment or to reduce the effects of shading and light loss, etc. The final result should retain the main framework of the crown, and so a significant proportion of the leaf bearing structure, and leave a similar, although smaller outline, and not necessarily achieve symmetry for its own sake. Crown reduction cuts should be as small as possible and in general not exceed 100mm diameter unless there is an over-riding need to do so. Reductions should be specified by actual measurements, where possible, and reflect the finished result, but may also refer to lengths of parts to be removed to aid clarity, e.g. ‘crown reduce in height by 2.0m and lateral spread by 1.0m, all round, to finished crown dimensions of 18m in height by 11m in spread (all measurements approximate.)’. Not all species are suitable for this treatment and crown reduction should not be confused with ‘topping’, an indiscriminate and harmful treatment.

Crown thinning is the removal of a portion of smaller/tertiary branches, usually at the outer crown, to produce a uniform density of foliage around an evenly spaced branch structure. It is usually confined to broad-leaved species. Crown thinning does not alter the overall size or shape of the tree. Material should be removed systematically throughout the tree, should not exceed the stated percentage and not more than 30% overall. Common reasons for crown thinning are to allow more light to pass through the tree, reduce wind resistance, reduce weight (but this does not necessarily reduce leverage on the structure) and is rarely a once only operation particularly on species that are known to produce large amounts of epicormic growth.

Non-living branches or stems due to natural ageing or external influences. Deadwood provides essential habitats and its management should aim to leave as much as possible, shortening or removing only those that pose a risk. Durability and retention or deadwood will vary by tree species.

Crown lifting is the removal of the lowest branches and/or preparing of lower branches for future removal. Good practice dictates crown lifting should not normally include the removal of large branches growing directly from the trunk as this can cause large wounds which can become extensively decayed leading to further long term problems or more short term biomechanical instability. Crown lifting on older, mature trees should be avoided or restricted to secondary branches or shortening of primary branches rather than the whole removal wherever possible. Crown lifting is an effective method of increasing light transmission to areas closer to the tree or to enable access under the crown but should be restricted to less than 15% of the live crown height and leave the crown at least two thirds of the total height of the tree. Crown lifting should be specified with reference to a fixed point, e.g. ‘crown lift to give 5.5m clearance above ground level’.

The initial removal of the top of a young tree at a prescribed height to encourage multistem brancing from that point, traditionally for fodder, firewood or poles. Once started, it should be repeated on a cyclical basis always retaining the initial pollard point, or boiling as it becomes known.

Bracing is a term used to describe the installation of cables, ropes and/or belts to reduce the probability of failure of one or more parts of the tree structure due to weakened elements under excessive movement.

Supplier of woodchips and timber 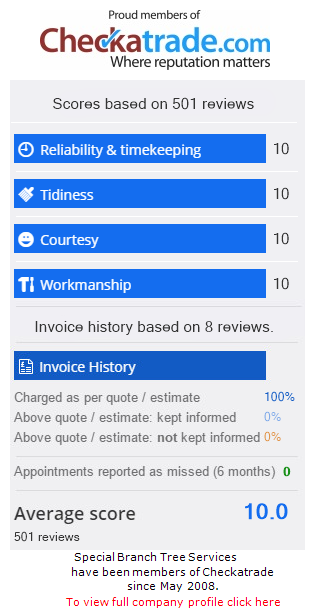